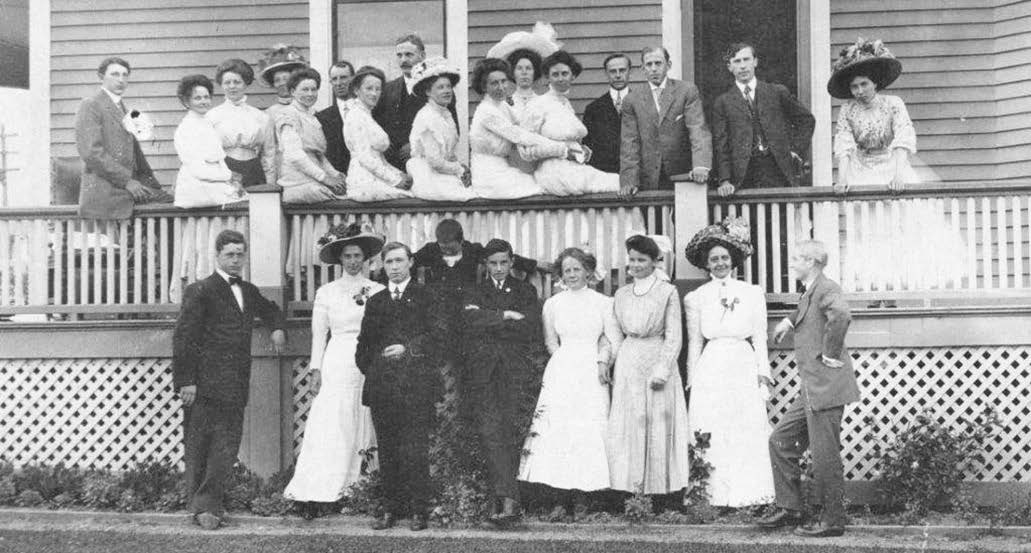 Article by Eva Kelemen, library director originally published in the Kaslo Claim by The Valley Voice.

Cover image caption: Miss Fawcett donning a hat, in the back on the left, circa 1909 at Giegerich House – 674 A Ave., Kaslo

Thanks to a petition signed by A.T. Garland, A.W. Anderson, R. Hughes, Vidler Papworth, L. Hanna, S.H. Green, John Keen, Ronald Hewat, Helena N. Keen, W. H. Burgess, and Sarah Carney, the Kaslo library officially incorporated on December 18, 1920. Library history in Kaslo actually reaches back further than this. There were public reading rooms with budget activities recorded in the Kootenaian in 1897. A long-running advertisement in several 1898 editions of The Kaslo Morning News enticed people to move to Kaslo, “The City of Energy!” to enjoy services such as public reading rooms. Albert Letts ‘continued as librarian’ according to the British Columbia News on April 1, 1898.

The first location for the Kaslo library was in a janitor’s closet in the Kemball building. In 1924, the library moved to the top floor of City Hall. The first librarian for the Kaslo Public Library was Miss Charlotte Fawcett. She was involved in book lending well before 1920. In the January 18, 1912 edition of the Kootenaian, Miss Fawcett invited Kaslo residents to borrow from 80 library books shipped from Victoria in the ‘New Circulating Library’ article. She continued as volunteer librarian until she passed away in 1938.

In 1953, Library Commissioner C.K. Morrison “toiled up the steep stairs leading to the top room of the… tower of City Hall, [to find] a faithful and gracious ‘library lady’ still holding the fort.” He described the collection as “an unhappy conglomeration of moth-eaten books” and helped Kaslo to make a “fresh start” with a “new library board” and “money from the Public Library Commission, matched by a like amount by the City Council.” This funding made it possible for the library to purchase books and move to the main floor of City Hall, where it operated for the next 29 years. (from A Book Pedlar in British Columbia, p. 42)

The longest service record at the Kaslo & District Public Library goes to Mrs. Joan Matthews. She served on the board from 1961-68 as chair, secretary, and treasurer and volunteered before that. It is unclear when she became a librarian; however she completed the new Provincial Community Librarian training in 1971 and became our first Community Librarian. A retirement celebration was held for Mrs. Matthews in 1985.

In 1982, after major renovations led by KDPL Chair, Debra Barrett, a determined board, Mrs. Matthews and with help from Katimavik youth volunteers and many other volunteers, the Kaslo & District Public Library moved to the ground floor of City Hall. This space operated as the jail from 1898-1913 and then became a storage space for public works. It still had a dirt floor when renovations began! This was not the only renovation challenge to overcome. Visit the Local History room at the library to see some before and after pictures of the exterior or borrow a copy of the illustrated History of the Kaslo & District Public Library 1920-2015 (complete with news clippings from 1898) to find out more.

While library services may look different with technology improvements, they continue to be about sharing resources (books, e-books, movies, programs, Wi-Fi, & more) in the community to meet needs for lifelong learning, information, and recreation. The library’s history is rich with dedicated volunteers, staff, and trustees. This year, the Kaslo & District Public Library Association celebrates 98 years of community spirit, sharing, and service!