Cover image caption: The Langham building on A Avenue, possibly 1914.

By any estimation, the Langham is one of the jewels in the crown of West Kootenay heritage buildings – a beautifully restored example of Victorian-era hotel architecture. But buildings are far more than mere containers. They’re living ‘books’ whose ‘pages’ whisper to us – a reminder that, no matter how much fashions and technologies change, there’s much to connect our lives to previous generations.

And thanks to generations of local historians, the Langham today speaks lucidly of its storied past. These stories – true and false – include whispers of the Langham as a brothel (uncertain), possessing the longest bar in the world (uncertain but unlikely), and being haunted by a Japanese-Canadian toddler who died in the building (unlikely). Hauntings make great story material but the only JC child of that age who died during the internment years was five-year-old Masuye Kitagawa, who actually fell from a third-storey window in the Kaslo Hotel, not the Langham. And it’s known that Molly Brown, infamous in the Slocan mining district for keeping a brothel in nearby boomtown Sandon, lived at the Langham until her death in 1948. Her presence alone was likely enough to stoke the local rumour mill.

On page one of the Langham’s memory book would be its builder, Charles Joseph (Carl) Kapps. Born in Bremen, Germany, Kapps (originally Kapsch) arrived in Kaslo in 1893 at age 27. The earliest known ad for his original Slocan Bottling Works on D Avenue is in the Kaslo Times of March 3, 1894. It was washed away in the 1894 flood. He acquired the lots on which the Langham now stands in 1896 and completed its construction by 1897. Kapps’ bottling works originally occupied an annex there that no longer exists. The aqua-coloured bottles from his Slocan Bottling Works are now highly prized by collectors.

The earliest mention of the newly finished Langham appears in the British Columbia News of July 16, 1897, noting it as “a large finely furnished three-storey structure of high-class lodgings” operated by Eleanor ‘Ella’ Case and Sarah Warner. According to historian Greg Nesteroff, “Its namesake was presumably a hotel in London, one of the world’s largest and grandest, built in the 1860s and still in business.” This was no whip-sawn frontier hotel but a modern establishment. A Sandon Paystreak article dated July 17, 1897 describes the Langham as having “the benefits of all modern improvements in the way of electric lights, baths, etc.” 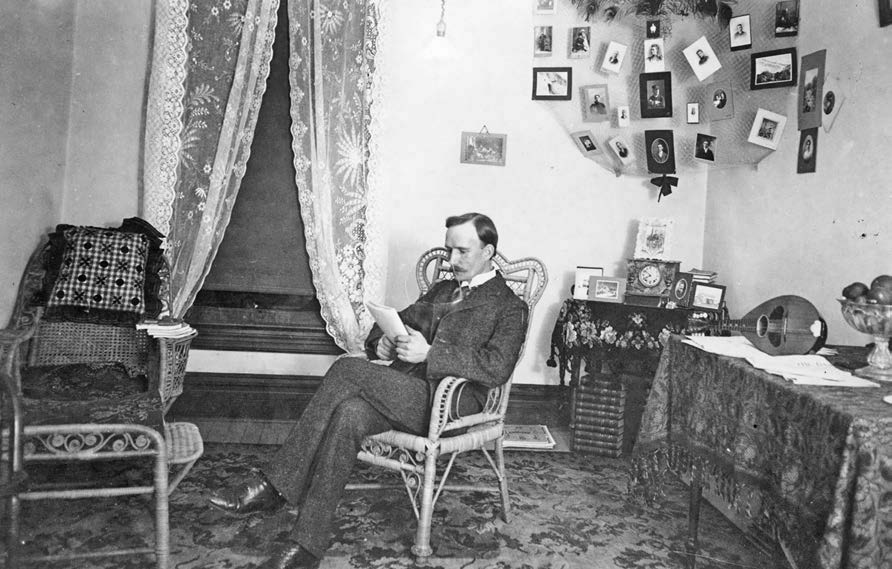 Kapps finally sold the Langham to Alfred John Curle and Arthur R. Heyland on August 26, 1910. “Heyland was a surveyor and civil engineer, responsible for laying out the Poplar and Gerrard townsites as well as additions to Sandon and Kuskonook,” writes Nesteroff. Curle – who remained a lifelong bachelor – was an English immigrant from Kent who worked in the office of the K&S Railway. He also worked as a prospector and land agent, and served as a Kaslo alderman in 1916-17. A sports enthusiast, he gave back to the community by funding scholarships and purchasing equipment for local clubs. Curle was one of the founders of the Kaslo Golf Club and reportedly the first to own golf clubs in Kaslo. He could also be seen cutting a swath on Kootenay Lake with his motorboat Red Wing, winning races in 1912 and 1913. He became known as ‘Unc Curle’ by generations of local kids, who often visited him in his lodgings at the Langham. Gus Carney recalled the Langham at the time as a “real rabbit warren,” mostly unoccupied except for Unc Curle’s room. “He was the kids’ pal. It was nothing to have 10 or 12 kids in the quarters of his. He was the greatest old man in the world.”

The Langham as it looked just prior to being renovated in 1974. Note the ‘Burn it down!’ graffiti.

By now the story of the Langham’s restoration is well known, but deserves a prominent mention in its memory book. By the early 1970s, decades of neglect had left the building in a state of near-collapse. Some Kaslo residents at the time felt it was an eyesore that needed to be removed. Graffiti on the building read: “Burn it down!” Enter Michael Guthrie, a musician and co-owner with his wife Darelyn of the Village Green Café, a local hotbed of good food and live music from 1973–79. “I couldn’t bear the thought of this great example of architecture being torn down,” Guthrie recalls. He contacted building owner Walter Schmidt, who also had dreams of reviving the Langham but lacked the finances to do so. “He agreed to sell it for what he paid for it, which was $3,500.” Guthrie formed the Langham Cultural Society as a means of purchasing and restoring it with the aid of various government grant programs then available. A $5,000 loan to the society from the Kaslo Credit Union got the restoration project underway. “Walter actually lost money on the deal… his generosity should be noted for without it there would be no Langham Cultural Society,” Guthrie recalls. At the time, ‘hippies’ were viewed with suspicion and many doubted the project would succeed. Time proved the skeptics wrong. And the rest, as they say, is history—living history in a building that remains a vital arts and cultural hub to this day. The “burn it down” graffiti was saved for posterity.

These are just a few pages from the memory book that is the Langham, rich with both sorrow and joy, as the story of Japanese-Canadian internment will show.