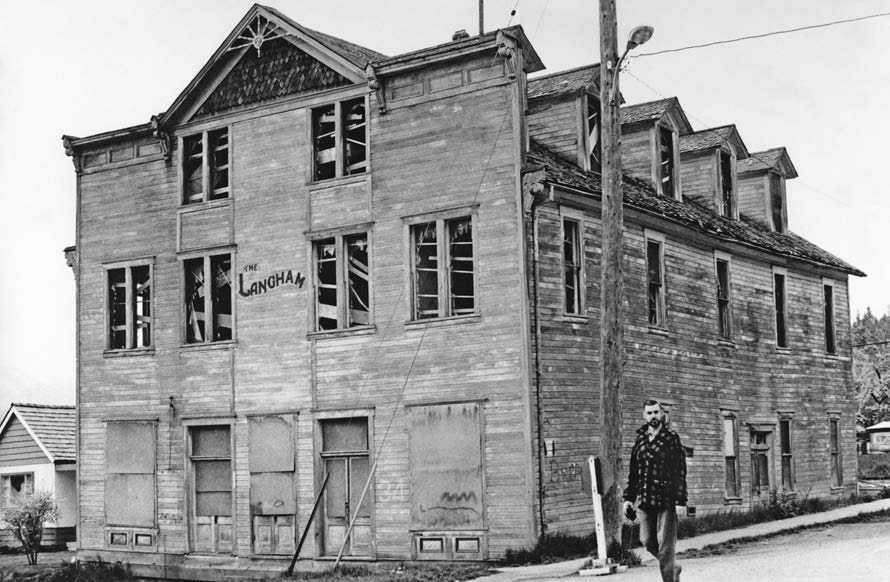 Cover image caption: By 1974, the Langham was condemned and ordered torn down or restored.

When you look at the Langham building today, it’s hard to believe it ever looked like it does in the 1974 photo on this page. What a transformation!

The restoration project, which took place from 1974 to 1977, was recognized by Heritage Canada in September 1977 as the best restoration project in Canada. In November 1977, the Langham Cultural Society was awarded the Park and Tilford Trophy “for exceptional efforts devoted to beautification and community benefit.” More recently, in 2014, the building was named one of the top 12 best buildings in the province by the Architecture Foundation of BC, out of 450 nominations.

The story of saving the 1896 Langham building is one of persistence, can-do attitudes, and maybe a touch of idealism. It starts with Michael Guthrie, who was 25 years old at the time.

“I always loved the old building, with its grey wood and especially the old lettering on the front, which simply said, ‘The Langham.’ Being a sign painter, I was always looking at examples of lettering from the 19th century that were occasionally found in the area. I couldn’t bear the thought of this great example of architecture being torn down,” he said in a history of the Langham Cultural Society he wrote in 2014. 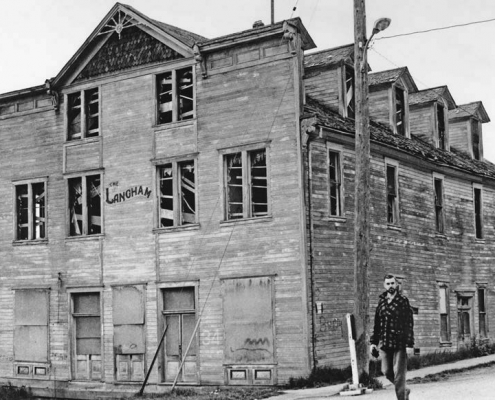 By 1974, the Langham was condemned and ordered torn down or restored.

But the building was indeed under threat of demolition. In June 1974, the Village of Kaslo gave public notice that the building would be torn down unless the owner restored it or sold it to someone who would. Community sentiment concurred. Spray painted on the side of the building were the words: “Burn it down. Didn’t you here me.”

Michael’s first idea was to create an artists’ co-op to take over the building. This idea didn’t gain any traction because none of the artists had any money for renovations. Next, Michael tried to convince his wife that they should buy the building and move their business, the Village Green Café, from its location on Kaslo’s main street to the Langham. That didn’t fly with his wife, Darelyn. Finally, inspired by a story about the formation of the Creston Arts Council that he heard from a man who picked him up hitchhiking, Michael asked some friends if they’d like to establish a non-profit society to restore the building. Ten people stepped forward to be the directors on the first board of the Langham Cultural Society. 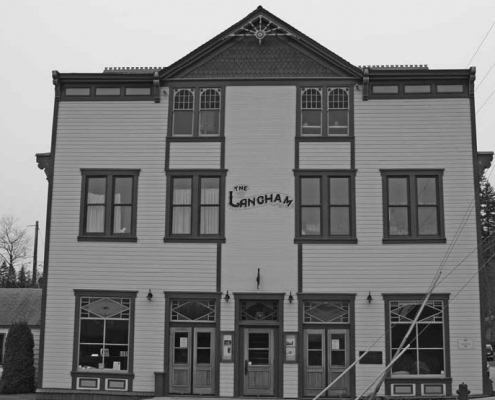 Through the efforts of a dedicated group of volunteers, the building was saved and has become a cultural centre within the Village of Kaslo.

Michael wrote to the owner of the building, Walter Schmidt, who lived in Cape Cod, Massachusetts, asking if he’d sell the building to a society. Walter agreed to sell it for the same amount he paid for it – $3,500. The Kaslo Credit Union loaned the society $5,000 to buy the building, cover legal costs, and to publish a pamphlet soliciting memberships and donations. The ten directors had to co-sign for the loan in case the society failed.

Walter came to Kaslo to sign the papers and accept his payment in November 1974. “The exchange rate at the time was in favour of the Canadian dollar, so Walter actually lost money on the deal,” recalls Guthrie. “Walter was so good about it and his generosity should be noted. Without it, there would be no Langham Cultural Society.”

At the first formal meeting of the board, held at the Village Green, Michael was elected president, Jim Van Horn vice president, Gloria Davidson secretary, and Darelyn Guthrie treasurer. Directors were: Fred Hiigli, Barbara Scrivens, Allan Davidson, Jackie Bowyer, Pat Bowyer, and Bart Darnell. They decided that the society would restore the building and create a performance space and art gallery on the main floor, and studios upstairs for rent. This group met several times to write the constitution and bylaws. The paperwork was sent off to Victoria in November 17, 1974 and the society was officially registered on June 16, 1975.

In the early months of 1975, before the society was official, Bart Darnell and Gloria Davidson resigned. They were replaced by Murray Ford and Allan Dobie. Soon after the society was registered, Jim Van Horn resigned and was replaced by his wife, Fern. She went on to replace Michael as president when he resigned in summer 1976, shortly before his term was up.

Early fundraisers included bake sales, dances at the Legion Hall and now demolished Scout Hall, and benefits at the curling rink in 1975 and 1976 with films, musicians, performing dance, and a dance band. At the first benefit, the society raised $1,350 to buy all the shingles for a new roof.

In the first year (1974-75), before the society was registered, all work was done by volunteer labour. There were cleaning parties, and half the roof was replaced. Once the society was up and running, a total of $113,007 in grants was received to complete the roof, repair the foundation, restore the exterior, and renovate the ground floor. These grants came from the federal Local Initiatives Program Fund ($28,020 In October 1975 and $36,000 in October 1976) and the provincial Recreational Facilities Fund ($48,987 in September 1976).

The grand opening was July 17, 1977, with a theatre and two art galleries on the main floor.

A 1979 report from then Langham administrator Gloria Davidson says the restoration project was also supported by community fundraising, which averaged about $6,000 per year, and thousands of hours of donated time from consultants and workers.

And now, 40 years after the restoration and renovations were completed, the Langham is once again undergoing big improvements. Paul Grace-Campbell became administrator in January 2017 and hit the ground running. He has overseen the $170,000 improvement project, which has included a new exterior paint job, new exterior signage, renovation of the main gallery to professional standards, new heritage-conforming interior doors, new double glazing for remaining single pane windows, energy-saving blinds on interior windows, new carpet on the main stairways and second and third floors, the installation of a heat pump heating/ cooling system in the theatre, structural reinforcement of the foundation and roof, improvements to the fire safety and security systems, and improvements to various electrical, ventilation and lighting systems. He secured $157,500 in grants from Columbia Basin Trust ($75,000), BC Canada 150 ($70,000), Columbia Kootenay Cultural Alliance ($11,000), and the Community Fund of North Kootenay Lake ($1,500) for the project.

Paul also successfully applied for $22,000 under CBT’s new Arts and Culture Venue program to upgrade the theatre’s aging technical equipment. This includes new lighting and new audio and video equipment. “Once the Langham is connected to the Kaslo infoNet fibreoptic cable, we will be able to livestream audio and video to the internet, so it will bring the Langham programming up to modern standards,” says Paul.

The last piece of the project is to create a new exhibition space and gallery. This involves repurposing the building’s largest studio, on the second floor. The new space will focus on Japanese Canadian and Asian exhibits, and serve as an extension of the Japanese Canadian museum, which currently consists of displays throughout the building. “There will be an interactive computer station so there will be access to more materials, and it will be more interactive,” explains Paul. This is being funded by the BC Canada 150 grant and with a gift from the estate of Hiltrud Rohlman, a longtime active volunteer at the Langham.

On August 6, 1988, a plaque was affixed to the exterior of the Langham during a ceremony to formally apologize to the Japanese Canadians interned in the Langham and elsewhere in Kaslo. The Village of Kaslo became the first municipality to offer redress.

On the Thanksgiving weekend in October 2017, to commemorate the 75th anniversary of the internment, the Langham hosted a gala event with evening receptions, films, theatre and music performances, an afternoon panel discussion, cultural activities, and workshops. This was organized by Maggie Tchir, executive director of the Langham from 2014 through 2016. “This was the biggest commemoration of Japanese Canadian internment in the province, if not the country,” said Paul.

On June 15, 2018, the Honourable Claire Trevena, BC Minister of Transportation and Infrastructure, will unveil a Highway Legacy Sign at the Langham to commemorate the 75th anniversary of Japanese Canadian internment. This is one of eight signs being installed at internment and road camp sites in the province.

The Langham has been a very active cultural centre since 1977. Today, there are shows continuously in the two art galleries on the main floor. The current curator is Seathra Bell from South Slocan. Kaslo resident Lynn van Deursen has been the volunteer theatre coordinator for years. David Jackson, Kaslo resident, volunteers as the FLIKS (Film Lovers in the Kootenays) coordinator. The centre has 13 studio spaces that it rents to artists, practitioners, entrepreneurs, and community groups. “There’s always something going on here,” Paul says, “violin, guitar, artists, massage. It’s a community space.”