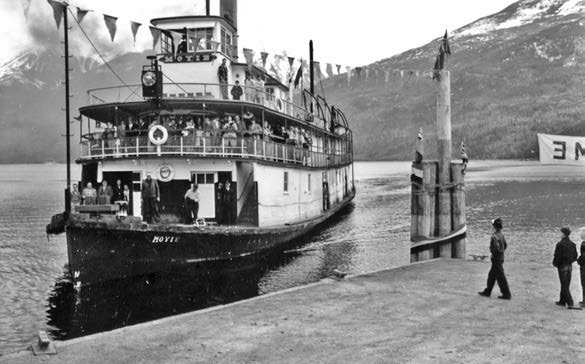 Cover image caption: The SS Moyie arrives at the Kaslo wharf on its final run, April 27, 1957.

April 27, 1957. The scene at the Kaslo dock is festive – pilings wrapped in red, white and blue bunting. A crowd has gathered to welcome the SS Moyie sternwheeler on its final run after nearly 60 years’ service on Kootenay Lake. A contingent of Boy Scouts and Wolf Cubs are parading on the wharf to the brassy music of the Kaslo Junior Citizens Band. A large banner reads: ‘Better Lo’ed Ye Ne’er Will Be. Will Ye No Come Back Again,’ an homage from the community’s Scots, many of whom have served on the Moyie as captains, deckhands or engineers. The crowd cheers as Captain Norman McLeod edges her graceful hull into the wharf for the last time. 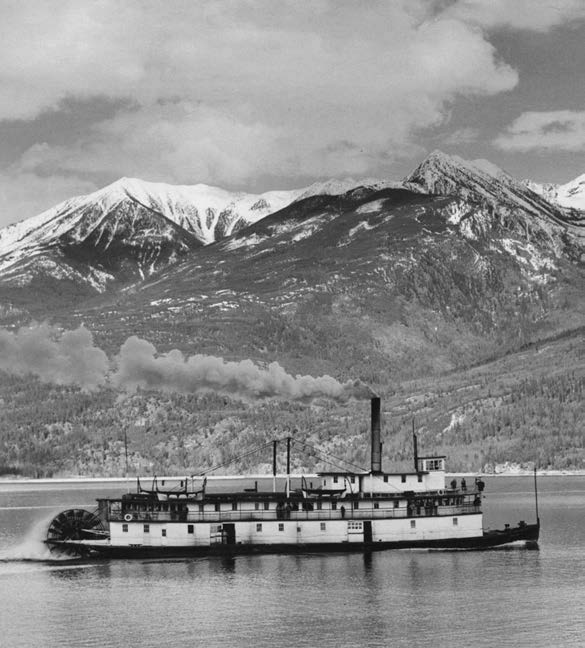 But it’s a bittersweet celebration. Far more than mere transportation, the Moyie had been an integral part of life for Kootenay Lake residents. Dubbed ‘The Lady of the Lake’ by the Nelson Daily News when her retirement is announced by the CPR on April 10, 1957, its reporter writes: “The rhythm of life on Kootenay Lake in the first three decades of the century beat to Moyie’s paddlewheel. To communities dotted along the lakeshore she brought mail, cargo and visitors. Travellers found her cabins comfortable, the dining room amply luxurious. Boat days were social occasions, when people thronged to watch her dock, disgorge and take on freight and passengers. She was a fine sight, everyone agreed, particularly on a bright day when her long white form reflected deep into the lake as she surged ahead, smoke billowing from her single funnel, her paddle kicking up the spray.”

With the Moyie’s retirement, Kaslo residents are saying an affectionate goodbye to an era. “If an isolated rancher had a sick wife or child, he had only to wave from shore in daytime or set flares on his beach at night, and Moyie steamed in,” continues the Nelson Daily News. “Time didn’t matter a hoot. If it took a farmer half an hour to herd a cow downhill to the landing, Moyie waited. Many’s the time she rested while the crew puzzled over how to get a newfangled car up the gangplank and through her narrow entrance to the main deck.”

The Moyie arrives at Kaslo after completing a ceremonial circuit of Kootenay Lake, stopping at the 13 communities it serviced to bid farewell. The Nelson Daily News estimates that, in service of these remote settlements, “at a conservative estimate, she has paddled the equivalent of 60 times around the world.” Starting out from Kaslo in the morning, the Moyie is given a grand send-off, with a flotilla of small craft and the tug Amabilis. From there it steams north to its first stop at Shutty Bench, where passengers are joined by Captain GA West, “carrying three dozen daffodils for the passengers because he and his wife had always done so on their annual spring trip over a 38-year period,” notes the May 2, 1957 Kootenaian.

At Lardeau, under a banner reading ‘Farewell Moyie,’ 20 cars and trucks are gathered to salute her with their horns. Steaming into the wharf at Argenta, the ship’s crew is presented with a wreath of flowers designed by Carol Tarr and presented by her sister Sylvia, with a banner reading, ‘In memory of a faithful servant.’ As the Moyie pulls away passengers are serenaded with Auld Lang Syne. At Johnson’s Landing, the crew receives a daffodil wreath made by Colleen Brocannier and Robert Stenberg and presented by nine-year-old Shirley Stenberg. From there the Moyie steams south to Procter, completing her nine-hour circuit of Kootenay Lake back in Kaslo, where she will be permanently beached. The community has acquired the sternwheeler from the CPR for a dollar, with plans to turn it into a museum.

Among the 100 passengers on the Moyie’s last run are Arthur and Kathleen Lymbery, one of the founding families of Gray Creek. “Mr. Lymbery was first a passenger in 1911 and his wife in 1919,” reports the Kootenaian. “We always like to eat on this boat best,” observe the Lymberys, and no wonder. Morris Condon in his memoirs later recalled that dining on the CPR’s Kootenay Lake fleet was nothing short of first class. “Table settings were the envy of all ladies, only the finest linens were used to grace the tables embellished with flower vases. Cream and sugar bowls, coffee and teapots, as well as condiments and cutlery, all were silver-plated. For the pleasure and enjoyment of the ladies wishing to effect social superiority, afternoon tea was served at precisely three o’clock. The guests were summoned by a steward playing miniature chimes promenading around the ship twice.” French cuisine was standard fare, even including imported oysters from time to time.

“In the days when she was one of several paddlewheelers on the lake, Moyie was a Cinderella, a chore girl switched from one route to another to push barges and ferry freight and passengers as business demanded,” concludes the Nelson Daily News. “Her bigger stepsisters Kuskanook and Nasookin had the glamour roles. Yet she was to outlive both of them.” How true – the Moyie remains the oldest intact passenger sternwheeler in the world, host to thousands of visitors every year.

The Langham– from Derelict Building to Kaslo’s Cultural Centre