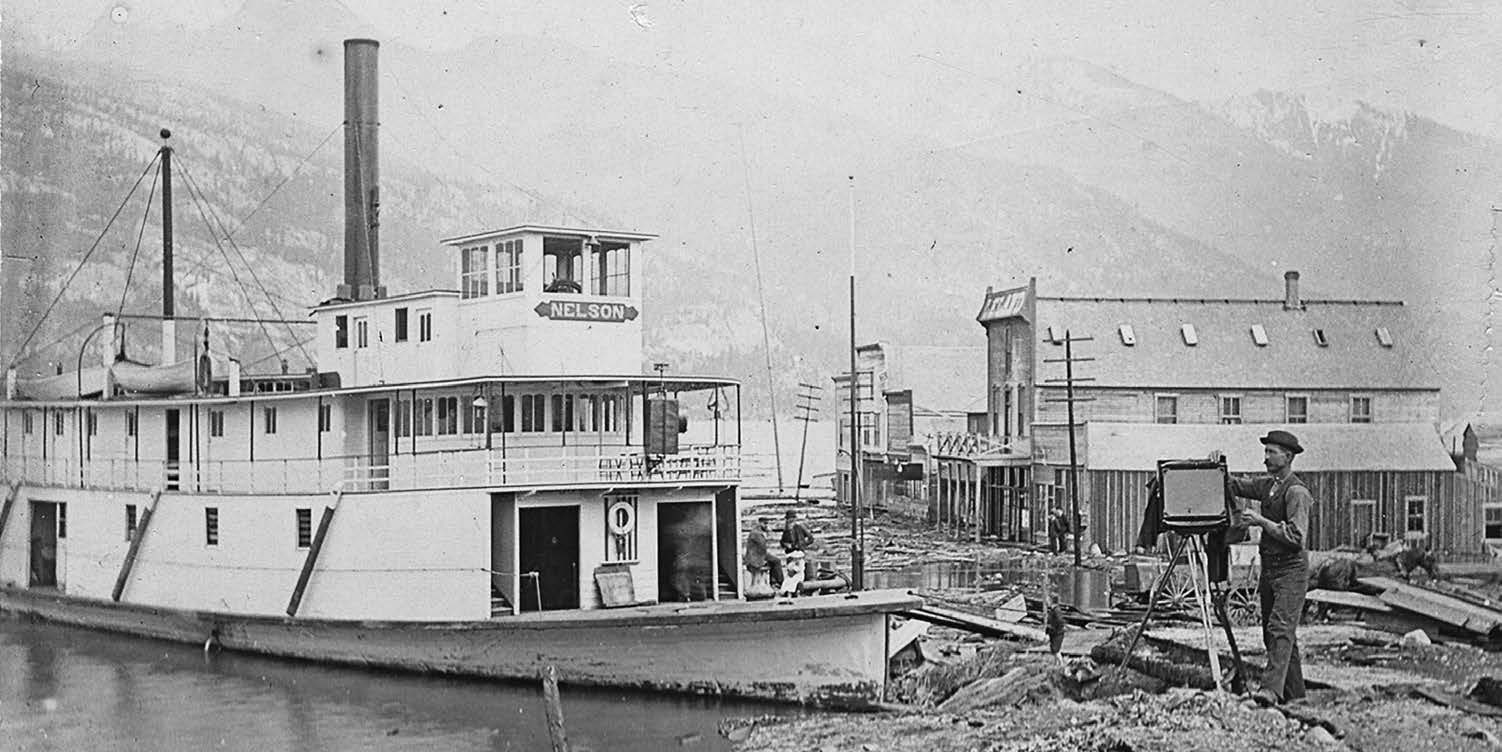 Cover image caption: SS Nelson in Kaslo at the lower end of Front Street during high water in 1894. The photographer with his camera is likely a rare self-portrait of RH Trueman at work.

Summer 1887. George Thomas Kane stands on the beach at the mouth of the Kaslo River, taking in the glacier-capped mountain peaks, the pristine indigo waters of Kootenay Lake. Kane is on his way to Victoria to report to his employer, Waterous Engine Works, on a sawmill installation he has recently completed at Canal Flats. In his mind, this river delta is the ideal place for a brand new town.

In 1888 he returns to scout locations for sawmill sites for Joshua Davies of the Sayward Mill Company. Kane selects two 300-acre sites, one at Pilot Bay, the other at Kaslo, and applies for both. Davies chooses the Pilot Bay location, leaving the future townsite to Kane. Unknown to him, George Buchanan has already pre-empted land on the north side of Kaslo Bay for a sawmill. So in 1890 Kane forms the Kaslo-Kootenay Land Company to pre-empt the land south of Buchanan’s parcel. He brings along his younger brother David to live on the site while he travels to Victoria to register his land title. David builds a log cabin near the corner of Front Street and Third Street and lives there all summer with only a rowboat for transportation. He survives on fishing, hunting and berry-picking, sharing his cabin with a small dog and a tame bear. To the prospectors in the district the new place becomes known as Kane’s Landing. To the Kutenai Indians (Ktunaxa nation) it is known as “Qatsu,” meaning “the land between the snow and the water.” 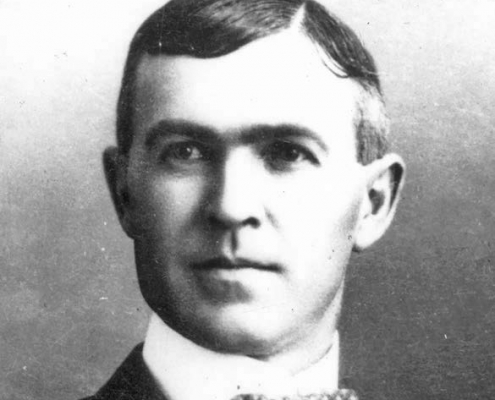 In the spring of 1891, Buchanan returns to Kaslo with his wife. They eat breakfast in David Kane’s log cabin with his clearing crew. Mrs. Buchanan becomes the first white woman to set foot in Kaslo. Later that year, Andrew Jardine, Jack Allen and John MacDonald (Lardeau Jack) stake the Beaver Claim, north of Kaslo River. This is soon followed by the lucrative Payne claim above Carpenter Creek near Sandon, putting Kaslo’s future prospects on a sound footing. As with any mining boom, the news travels fast. Before long prospectors and miners are arriving on a daily basis. George Kane’s lots are selling fast and buildings are going up everywhere.

“David Kane has a larger house built and hires a cook to feed all these newcomers. By the end of 1892, buildings to the value of $100,200—mostly on Front Street and A and B Avenues—have been built,” writes archivist Elizabeth Scarlett. The need for a wagon road to service the mines in the mountains west of Kaslo is soon met with an enthusiastic fundraising drive that nets $20,000 and plenty of volunteer labourers. Before long the road is built to Fish and Bear lakes at the pass and to Three Forks. A wagon service leaves Kaslo for the mines each morning loaded with prospectors and supplies.

By 1892, businessmen feel confident enough of Kaslo’s future to apply for incorporation as a city. But already the first shocks of an unstable market are being felt. “Much of the money to finance the mining endeavours and town is coming from Spokane banks,” explains Scarlett. “The Sherman Silver Purchase Act is repealed by the United States Congress in 1893 and silver prices fell precipitously.” Kaslo receives its charter of incorporation on August 14, 1893. Under existing laws, which require voters to own property for a year, only 50 residents can vote. Robert Francis Green becomes Kaslo’s first mayor.

But the new community nearly doesn’t make it past its infancy.

February 25, 1894, 2:30 am. Fire is spotted at the Bon Ton restaurant on Front Street. A bucket brigade is quickly set up, but the fire spreads rapidly. Men station themselves on the roofs to keep sparks from starting new fires, keeping the fire contained to Front Street. But by 4:30 am it’s clear drastic measures are needed. The Byers Hardware Company building is purposely blown up with dynamite, stopping the spread of the blaze but destroying the block.

June 1894. The heavy winter snowfall, prompted by a sudden warming spell, gorges all the creeks. The lake rises nine metres (30 feet) and soon all the buildings in the lower half of town are surrounded by water. East of 3rd Street, the entire city is submerged except for a few buildings on the alley between A and B Avenues. On June 3rd Mrs. McKay is enjoying tea on the verandah of the Leland Hotel when she notices a “peculiar stillness.” This is followed by heavy cloud cover and a sudden fierce wind strong enough to scatter objects across town. “The storm is intense, many estimating the wind to be over 100 miles per hour (161 km/hr),” writes Scarlett. “It expends itself in less than an hour, but the destruction it creates is almost indescribable. All the houses below 3rd Street are swept away and the Galena Trading Company’s store cracks in three places and collapses. The only things saved are the barrels and cases of liquor found floating up the lake towards Lardeau.”

Today, 125 years later, one question about Kaslo remains unanswered: where did its name come from? Over the decades many theories have been proposed but none proven. Kaslo historian George McCuaig, in his book Kaslo—The First 100 Years, offers several possibilities. “One opinion was that it was named after an Indian, ‘Old Caslo,’” who worked for fur trader Richard Fry. “Another version was that it was derived from an Indian word – ‘Asassaloe,’ meaning ‘home of the blackberry,’ and shortened first to Akasloe, then Kaslo.” Another theory, that it was named for a Hudson’s Bay trader named John Kasleau, has since been disproven. The mystery remains.