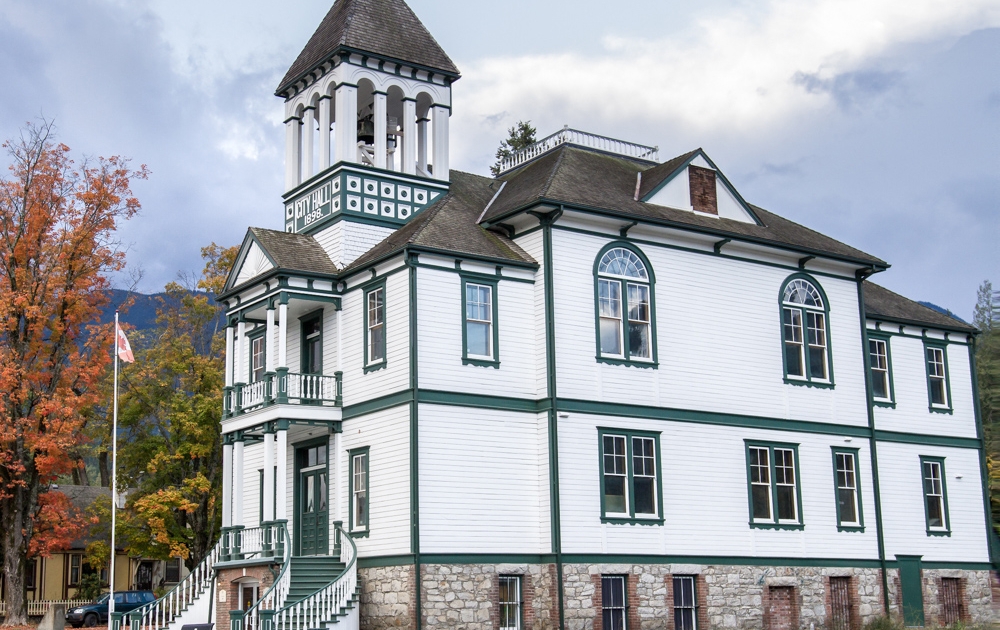 The 1898 Kaslo City Hall building, a National Historic Site and a major heritage landmark in the community, stands tall and proud after a 10-year, $1 million conservation effort from 2008 to 2018. The final renovations were completed just in time for Kaslo’s 125th birthday celebrations.

The conservation started at a time when the Village had just purchased the provincial government building (Kemball Memorial Centre) and there were moves to demolish the fire hall, which had been built onto the City Hall in the early 1970s, and build a new fire hall elsewhere.

Phase 1 – Take it from the top

The City Hall building’s makeover started with a new cedar shingle roof in April 2008. Impressed with the roof replacement job in 2006 by Kootenay Shakes at the Langham Cultural Centre, another of Kaslo’s outstanding heritage buildings, the Village’s City Hall Conservation Committee knew they wanted the same company to replace the roof at City Hall. The opportunity arose when St. Andrew’s United Church, an 1893 heritage building right across the street from City Hall, hired Kootenay Shakes to replace its roof in spring 2008.

“When we knew the Kootenay Shakes roofers were going to be in town to replace the church roof, we quickly got our ducks in a row so that they could move across the street to the City Hall straight away,” said Donna Cormie, chair of the City Hall Conservation Committee at the time. The roof was replaced with shingles from Remco Cedar in Cooper Creek.

The new City Hall roof cost $54,000, and was paid for with funding from a BC Heritage Legacy Trust grant and the Village’s City Hall reserve fund.

About a year later, on April 28, 2009, the roof was strengthened to meet snowload requirements, with four 44’-long beams and four 20’-long beams. The eight beams had to be maneuvered into place through the bell tower. The crane operator said it was like “threading a needle.” Andy Pritchard and his two sons, along with volunteers Don Page, Rick Hamilton, Daryl Laybourne and RD Johnson, successfully lodged the beams in place. Some flaggers from Nakusp who happened to be in Kaslo working for Telus volunteered to help with traffic control in front of the building during the work. 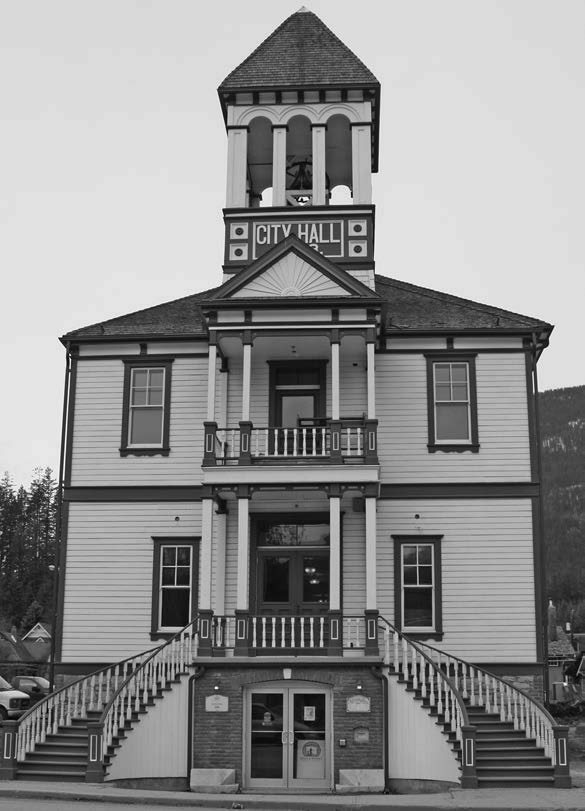 The Kaslo City Hall building has been beautifully restored.

Phase 2 – The basics & the basement

Grant writing for the conservation project started in earnest in late 2008. By fall 2009, funding was in place for the next phase of the project, which involved a new geothermal heating/ cooling system, a fire suppression sprinkler system, an electrical upgrade, refurbishment of the wooden window and door frames, new storm windows, and a renovation of the basement, where the Kaslo & District Public Library has been located almost continuously since 1982.

The Village offices and Council Chambers were moved out of the building in October 2009 in anticipation of this renovation. The move into the former provincial building, which had been purchased by the Village and renamed the Kemball Memorial Centre in 2008, was temporary – just until renovations were complete. That wouldn’t be for another nine years.

One of the main reasons for buying the provincial building was to house the Village offices and Council Chambers during the restoration of the City Hall building. Public discussions began in early 2006, and the community narrowly approved the purchase of the stately brick provincial building for $122,200 in a referendum on April 21, 2007 – by just 21 votes, 147-126. The building was assessed at $423,800 at the time. Negotiations between the Village and the Province regarding the lease for the government agent’s office took some time, and the offer to purchase wasn’t signed until March 27, 2008. The longterm borrowing for the purchase of the Kemball will be paid off this year (2018), and discussions are underway about its future.

With the municipal hall moved down the street to the Kemball Memorial Centre, the Village started the building permit application process. In 2010, Nelson architects David Dobie and Thomas Loh were hired to complete design drawings and all documentation required for the building permit, and long-time Kaslo resident Chris Temple was hired as project manager. The work got underway in January 2011 and was completed by the fall.

It became clear that the library would have to move out of the basement of City Hall for this phase of the renovations. A storefront on Kaslo’s main street became the library’s home from January to September 2011, while the basement was getting new wiring, new insulation, new flooring, geothermal heating, a new office, an expanded hallway, an accessible washroom, higher ceilings, structural upgrades, fire separations, and fresh paint.

The next phase, upgrades to the building exterior, didn’t happen until fall 2014, after the retirement of long serving CAO, Rae Sawyer. This phase had to wait – not only for the next round of successful grant applications, but also for the construction of a new fire hall.

The Kaslo Fire Hall had been built onto the City Hall building in 1971, and had to be demolished to restore the heritage building to its original footprint. The fire department needed a new home, anyways – it had outgrown the fire hall, which was in need of some serious work. A 2011 study recommended a new Emergency Services building to house the fire hall and Search and Rescue. The high cost of the new building was difficult for people to accept, so the referendum scheduled for August 2012 was postponed until detailed drawings and cost estimates could be presented to the public. In May 2013, the community approved the borrowing of $1.63 million, and the grand opening of the new fire hall took place on October 11, 2014. The old hall was demolished on September 19, 2014 by Rick Jones Contracting for $11,875.

The restoration of the exterior of the City Hall building could now begin. In fall 2014, the stone work around the foundation was repointed by Joe Stone Masonry; the wood siding boards were refurbished or replaced when necessary by Lorne Mazereeuw Woodworking; locks and closures on the doors were installed by Thomas and Co.; the circular entrance stairway and the south side stairway were rebuilt and installed by Lorne Mazereeuw; the eavestroughs were installed by Gray’s Contracting; the facia boards were painted by Tom Thompson; and the building exterior was painted by Davadec. Robert Inwood of Mainstreet Consulting was hired for some advisory services for this phase, as well. Chris Temple continued as project manager.

The building was painted white with green trim, as it has been since at least 1953. A 2002 study found two layers under the white and green paint, suggesting that the building was originally covered in varnish, and later with a dark reddish-brown paint.

The widow’s walk was also refurbished in 2014 with woodwork by Lorne Mazereeuw and Heritage Roofing, and woodturning by Ed Pretty of Langley. Pretty found his way to Kaslo on his motorcycle a few years ago and was quite taken with the City Hall building. He left his contact information at the Village office, offering to do any woodturning work on a volunteer basis. Pretty turned the spindles for the widow’s walk and the circular front stairway as part of this project, and has done some work on the bell tower.

The exterior restoration was funded through the Parks Canada National Historic Sites of Canada Cost-Sharing Program ($97,910.71), with matching funds from the Village’s Community Works fund. “It took years to get that Parks Canada funding,” Project Manager Chris Temple said. “Thanks to then Deputy Clerk Carol Hughes’ persistence, we finally prevailed.” The Village applied for Parks Canada funding for the City Hall project six times over the years before finally receiving the grant.

A wheelchair ramp was added to the west side of the building in spring 2016. “This was a very important piece of the puzzle because it made the building fully accessible except for the top floor courtroom,” Temple said.

Funded by Columbia Basin Trust, the $69,000 ramp was designed by Bob Inwood, engineered by Ron Molina, and built by Zap Welding. Joe Stone Masonry did the foundation work. 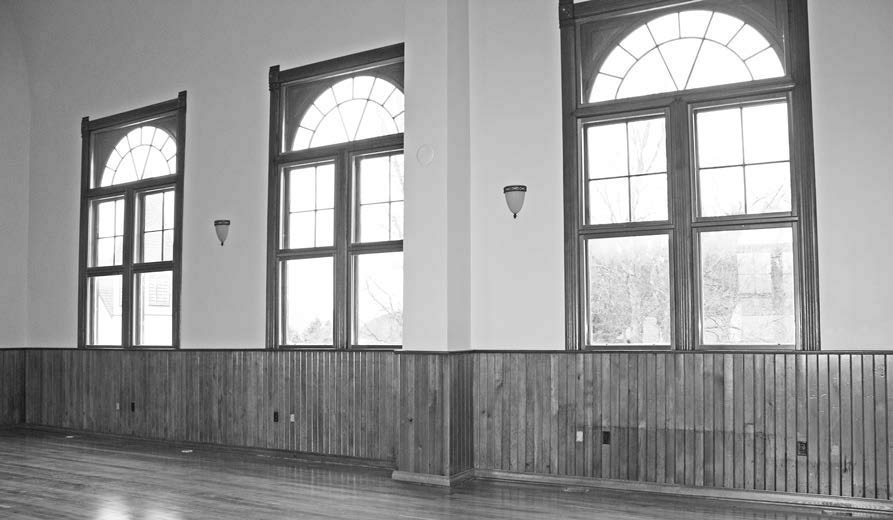 The top floor courtroom of the Kaslo City Hall building is back in all its splendor.

The final phase of the project, the interior renovation of the main floor and top floor (former courthouse and related offices), got underway in spring 2016 and was completed just in time for the 125th anniversary celebrations.

The renovations included plastering and painting the walls, refinishing the floors, replacing the wood trim, structurally re-building the front and back stairs, installing new doors, re-doing the plumbing and electrical, and completing the heating system.

“The plastering was a key part of the project,” said Temple. “The walls were in really poor repair and people doubted they could be repaired without tearing all the lath and plaster out. But Brian Garvin from Quality Interior Kontracting insisted that it could be done with a method he was taught in his apprenticeship. And sure enough, they did a fantastic job.”

Temple says the wood trim in the building is “truly one of the highlights” and commends John Burton from Queens Bay for an excellent job duplicating the ornate trim.

This final phase of the project was funded by CBT ($270,000) and the Village, again through its Community Works fund. Community Works funding consists of federal gas tax revenues and is provided to all local governments in BC for investment in infrastructure and capacity building projects.

The Village of Kaslo Celebrates 125 Years as an Incorporated Municipality

From Kane’s Landing to Kaslo – The Beginning
Scroll to top