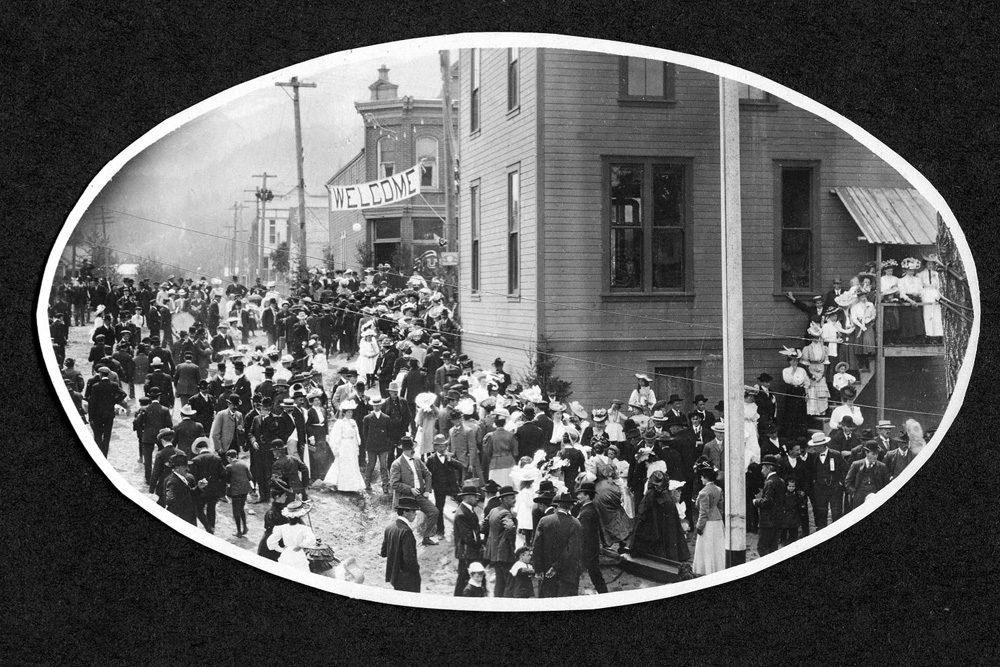 The municipality of Kaslo will reach the grand old age of 125 on August 14, and a number of events are being planned to celebrate this momentous occasion.

On Tuesday, August 14, Village Council will hold its first meeting in the brand new Council Chambers in the newly renovated City Hall building. Council and staff will briefly re-enact a historic council meeting in costume before moving into the regular council meeting. An historic City Hall display by the Kootenay Lake Historical Society will be set up in the Jury Room on the top floor of the City Hall building.

Many other local organizations are finding ways to celebrate Kaslo’s quasquicentennial, as well. Can you guess the theme of Kaslo May Days this year? Watch for the Village’s float, the mini Moyie, and the refurbished Maypole float in the parade. There will be new costumes handmade by Elaine Richinger for the Maypole Dancers and new ribbons from England for the Maypole. Following the Maypole Dance, the Citizen of the Year for Kaslo’s 125th will be announced.

On May Days Monday afternoon, you won’t want to miss the sponsored Maypole Dance featuring dancers from the past. Some of them are dancing with their original partners!

Logger Sports will have events for locals this year, to encourage participation from former competitors and anyone who has ever wanted to try their hand at Axe Throw, Stock Saw, Double Buck, or the Relay Race.

The Community Fund of North Kootenay Lake Society will hold its second annual Treasure Hunt for all residents of Kaslo and Area D. The first clues will be revealed at the society’s Annual General Meeting on June 4 at the Langham, with additional clues appearing in theKaslo Pennywise beginning on June 5. The person who finds the treasure will keep the handcrafted box and the $100 bill inside. A Treasure Fund is right now growing with donations, and is expected to exceed $1,500 by the time the box is found. The bulk of the fund will go to the finder’s charity of choice, with five per cent awarded to the finder.

The Kaslo Seniors Association will host a seniors’ brunch on Friday, June 22 at the Kemball Centre gardens from 10 am to noon, with live music and storytelling. The brunch will feature pancakes, scrambled eggs, sausages, fruit, toast, coffee, tea, and juice – and cake, of course, to celebrate Kaslo 125. All members and their friends are welcome.

On July 8 at St. Andrew’s United Church, there will be an anniversary service with Reverend Shelley Stickel-Miles, the minister of the church in the 1980s. She will preside over a dedication of a brass plaque honouring past members who contributed to St. Andrew’s and to the community of Kaslo.

On Sunday, July 29, the Kaslo Outdoor Trails and Recreation Society is planning a barbecue on the Unity Bridge, which will be decorated in Kaslo colours and flags from around the world, and guided walking tours of Kaslo River Trail.

The North Kootenay Lake Arts and Heritage Council will host a special arts and crafts table on August 11 at the Saturday Market. People will be invited to do an on-the-spot art project with a Kaslo theme in any genre they’d like – drawing, painting, writing, poetry, photography. There will be someone there to help people compose haiku, and artists will be available to take people to inspirational places for drawing and painting. The artwork will be hung on a clothesline strung up at the booth.

On August 19 at 10 am, there will be a Saddle-Bag service at St. Andrew’s with Catherine Rose from Riondel. At 2 pm, the church will present the pantomime, Tell Me a Story. First presented at St. Andrew’s United’s 100th anniversary in 1993, the play involves over 25 actors from the village and covers many interesting events from 1893 to the present. Lynn van Deursen is bringing the pantomime up to date for this special Kaslo 125 performance. A social time will follow in Heritage Hall.

The Langham has commissioned Lucas Myers to write a one-man, multimedia play, Kaslovia: A Beginner’s Guide, which he will perform on Friday, September 28 and Saturday, September 29 at the Langham. Myers’ one-man plays are simply too good to miss – mark your calendars now!

Another event of significance is happening this year on June 15, when the Honourable Claire Trevena, BC Minister of Transportation and Infrastructure, will unveil a Highway Legacy Sign at the Langham to commemorate the 75th anniversary of Japanese Canadian internment. This is one of eight signs being installed at internment and road camp sites in the province.

The Kootenay Lake Historical Society (KLHS) has published a revised edition of the book, Pioneer Families of Kaslo, with fascinating stories and photos, for this special anniversary year. The book is available at Figments on Kaslo’s main street, and online at klhs.bc.ca. A KLHS exhibit entitled ‘Kaslo, the beginning,’ was on display at the Langham from March 10 to May 14.